12h00 – Long time no write.  Well it’s been busy I’ve been to the UK twice and we’ve had a few visitors here.   The last week we have had at long last some rain, lots of rain.  It’s been a shame for those here on holiday but we really needed the rain.

I visited Colchester, UK and saw quite a few ex work colleagues, wore my kilt at the Scotland in Colchester event where my colleague John DID NOT do any drumming with CADPAD.   Then on to Milton Keynes (MK – a city in the country), UK and just fell in love with it again, what a remarkable city.   Then a couple of weeks later I was in my home city of Norwich, ‘a fine city‘ but I’m not sure I would want to live there again.  In Norwich I gave my colleague Charles a little help with The GREAT Norwich Duck Race promoted by the 1st Norwich Sea Scout Group, GREAT stuff, a huge turnout – WELL DONE Charles and colleagues.

Just had my cardiac stress tests and the cardiologist can’t find anything untoward but I did get breathless under low stress and he has advised a visual internal check, an angiography, CORRECTION it’s actually a coronary catheterization says the hospital at Auxerre. So I’m waiting for an appointment at Gien/Auxerre hospital to have camera poked up an artery into my heart – it doesn’t bare thinking about.   Looks like I’ll be cancelling my August trip to the Aboyne Games in Scotland.   I’d rather gets the medical stuff out of the way and know if there is or isn’t a problem.  I’m not convinced myself that it is not an allergy issue or asthma.

Been watching the Tour de France on ITV4 and TF2 as well as following it on ‘twitter’.  Unfortunately beacuse of my location (non UK) I cannot get the videos off ITV4 – its ridiculous.  I’m planning to go to Paris for the last day and support Mark Cavendish.  I’ll see if I can find my ‘C’mon Cav‘ placard which I made in 2010 when the Tour came through our village of Saint-Privé. 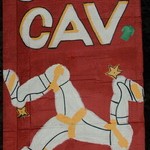 17h30 – C’Mon Cav — Allez Cav Tour de France, Cadel Evans has the yellow jersey and has won the tour, Mark Cavendish has the green.  It’s all over!  It’s tomorrow the final, so I won’t be there in Paris, we have visitors.  Well, never mind – I’ll put the ‘C’Mon Cav‘ sign at the gate.  It would have been nice to see Frenchman Thomas Voeckler win after all these years but Well done Cadel Evans, 1st time Australia – ‘Good on yuh mate!’

This entry was posted in General, Health, Holiday, Sport, Weather and tagged Sport. Bookmark the permalink.