10h00 – Have just spent a few days in Angleterryland again, this time Norfolk and Norwich via the Ideal Home Show and Muswell Hill.  I had not been to the Ideal Home Show at Earl’s Court for some years and I was interested in solar and wind energies and some sheds. What I found surprised me, many new energy companaies wanting to put photo-voltaic (PV) panels on your roof for free and maintain them.  You get the free power they generate and the company gets the payback from the government.  Seems like a good deal until you realise that if you could make the investment yourself you could get the 41/42p per unit from the government for the next 25 years instead of the new energy company.  The feed-in tarrif to the grid at 5p per unit seems almost a pittance compared to the 41/42p.  Also, should you opt for a company to use your roof, how do you get out of it should you want to later on put up your own panels. 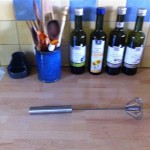 All singin', all dancin' hand whisk.

whisker / egg beater from Germany.  It is great, it’s all one piece, you don’t have to plug it in, you can pick it up and use it with the same hand (left or right, feet if you must), easy pump action (like a yankee-screwdriver), no handle to turn nothing to grip hard, it self centres itself in the container and IT WORKS, whisks semi-skimmed milk straight from the fridge to a froth in a about 5 or 6 pumps, similarly 10 or 12  for soya or nut milks. To clean, nothing to take apart (dis-assemble – whatever that means) just operate it in washing up water and/or rinse it under a tap – simples.

And so to Norfolk and Norwich.  I had a very full agenda visiting relations, freinds and colleagues again focusing on renewable energy and sheds.  Saw a privately owned wind turbine on Halvergate marshes, the base for a sun tracking 10kW PV set-up in south Norfolk near Long Stratton and some really nice sheds at Blofield.

This entry was posted in Holiday, Nourishment and tagged Drink, Food, Holiday. Bookmark the permalink.