17h00 – I first visited Stockholm in the mid 1970s on a round Scandinavia rail pass  and again in the late 1980s, I do not have much memory of either visit. This time I had a bit more money in my pocket and so was less restricted.  Additionaly armed with my iPhone 4 with WiFi, GPS and The Lonely Planet Guide all loaded we were off … bonne route …

Well, overall we had a great break in Stockholm (lonely planet guide) a fabulous city, plenty to do and see even in the ice and snow, we did get a bit of sunshine but even at midday the sun is so low in the sky, just over the roof-tops.  The main past-time was trying to keep upright and avoid being stabbed by falling icicles and roof avalanches – “Snö Ras”.   You definitely need boots in Stockholm, shoes even strong shoes are not good enough.

Everywhere has huge cloakrooms (Garderom) where you can hang up your coats while your bags and woolies could be stored in lockers. Thus leaving you unencombered while you wander around an art gallery or museum.  Even small cafés and shops have space where you can remove your outer garments without knocking something over.

Prices were high but not as high as I expected, hotels were possibly cheaper than London but eating and drinking out could be dear.  On the other hand some places did self-service buffets and these could be reasonable. 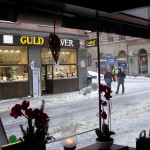 To the left is a view of Stockholm’s main shopping street ”Drottningatan” – Queen Street.  We were sitting in Hurtigs Konditori at the time having coffee and cakes, very nice cakes, watching the snow clearance gangs at work.  Se op! 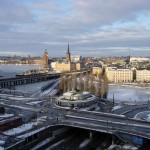 To the right is a view from “Katarina hissen” – The Katarina Lift, this lift takes you up to a walkway to central Södermalm, one of Stockholm’s islands, (malm translates as ore) thus avoiding an icy hill climb without spiked shoes.  It shows an amazing clover leaf road junction at “Slussen” (the lock / sluice) where six main roads intersect in the middle of the city, whilst entwining the  metro (Tunnelbana, T-ban), rail links, footpaths and the water.

A city worth a winter and summer visit.

This entry was posted in Health, Holiday, Nourishment, Weather. Bookmark the permalink.