09h00 – (Christmas Eve) Well we are back on the air again.   Sadly today is the funeral of my first mother-in-law Violet Ferries nee Emslie.  Violet had been in a care home in Abyone, Aberdeenshire, Grampian, Scotland for several years and she died at the weekend.   I was unable to get to her funeral due to severe winter weather conditions affecting air, rail and road transport in the UK.  Additionally the timing of the funeral, unavoidably on Christmas Eve, would mean me having more difficulty despite the weather with effectively a 4 day public holiday.   I eventually decided regretably  not to go when Charles de Gaulle airport at Paris, my home airort, began to experience delays due to weather conditions at the airport and not just the UK end. 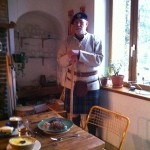 11h00 – I have on my new kilt which had arrived this week from Chisholm’s of Inverness.   Ancient Ferguson in 13oz weight wool Worstead (there’s another Norfolk connection).   I wore this in respect for Violet, I followed this by a midday lunch of mince (very well cooked) and tatties with skirlie, neeps and beetroot, all washed down by a healthy glass of Laphroaig whisky, I did look for my bottle of Glen Garioch but it was not to hand.  I tried to phone my brother and sister-in-law Peter and Alison before the service but mobile phone contact was not to be.

I shall miss her greatly.

This entry was posted in House, Nourishment. Bookmark the permalink.